A tremendously exciting Florint Europa Cup 2016 in Genoa left all of those involved a little exhausted. Now that we’ve managed to catch our breath, let’s take a closer look at the scoring by our judges to see what the winning arrangements were. Which of the 23 talented floral arrangers won the 6 individual rounds of this European Floristry Championship? And whose designs did the audience like the most!?

The arrangement that won this round, by Tamás Mezőffy from Hungary, was a distinctive mohawk design with an approach quite different from that of the other candidates. He employed a lined structure of braided grass ‘dreadlocks’ around his floral foam base, which won high marks for its idea and technical execution. The expert jury also lauded Tamas’ colour use.

Russian competitor Roman Steinhauer also scored incredibly high this round with a point total of 80.12, just below Tamas’ 80.98. Pirjo Koppi from Finland came third, with 75 points. An interesting observation here is that the 3 top-scorers in this first round of the championship, will turn out to be the actual top-3 finishers after the full six rounds as well: quite a remarkable twist of fate! 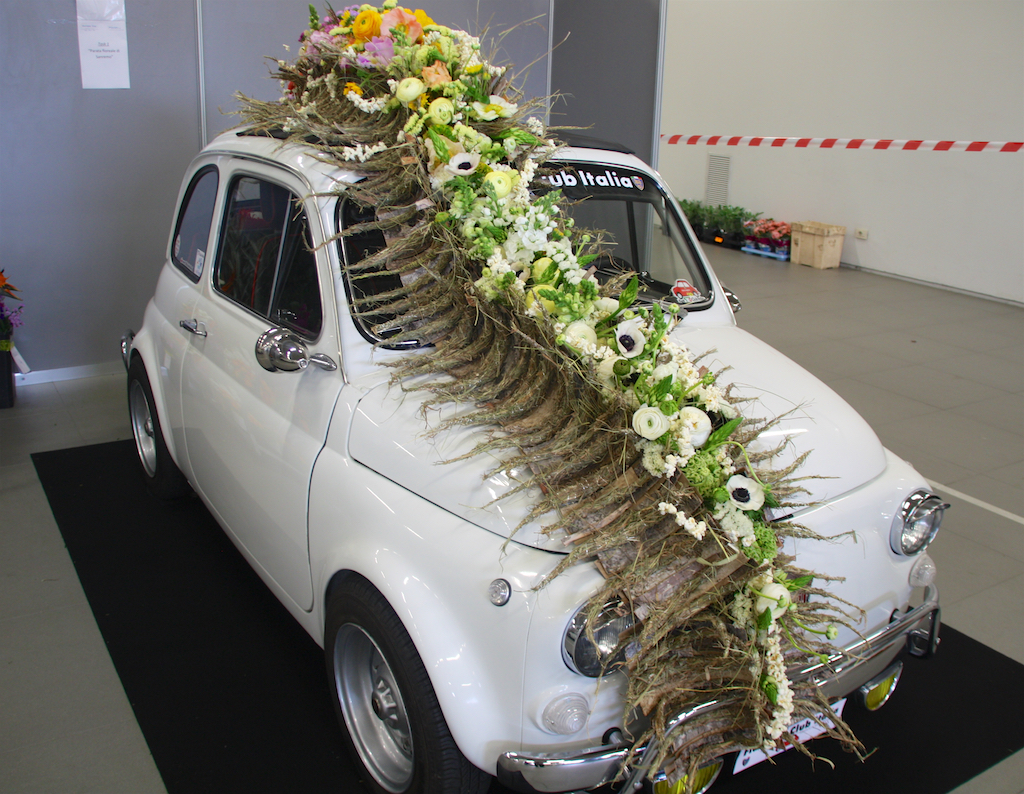 For the second of the six championship tasks, Europe’s best floral designers had to put together the ultimate spring-time table arrangement. And because the Europa Cup took place in the Italian city of Genoa this time, there were some related requirements: the table had to be set in the style of a picnic in the hills, and Pesto – a typically Genovese product – had to play a role!

Round 2 was convincingly won by the intricate, Easter-inspired arrangement of Roman Steinhauer (Russia), which employed a clever base of grain. He scored an unbelievable 91 out of 100 points for his Technique, coupled with comparably astronomic marks for his Idea and Composition. The two other top-3 finishers in this round were Silvia Unterberger (Austria) and Nicu Bocancea (Romania). 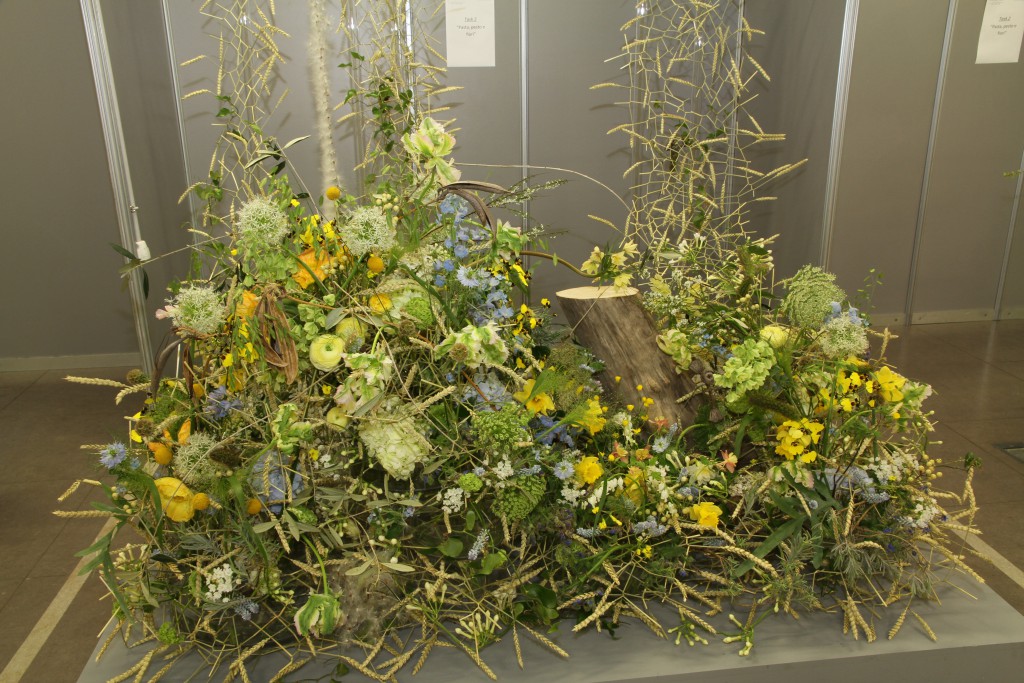 Hungarian competitor Tamás Mezőffy reclaimed the lead in the championship classification with his fantastic work in round 3! His highly original bridal design, worn on the shoulders, did a great job at capturing the Italian free spirit of the 1950’s and 60’s. He scored an unbelievable 93 out of 100 points for the Idea, and towered above the other florists with an additional score of 132 for Composition and 85.6 for Colour use. Only Silvia Unterberger from Austria came close, being the only other contestant to score more than 80 total points in this second round. 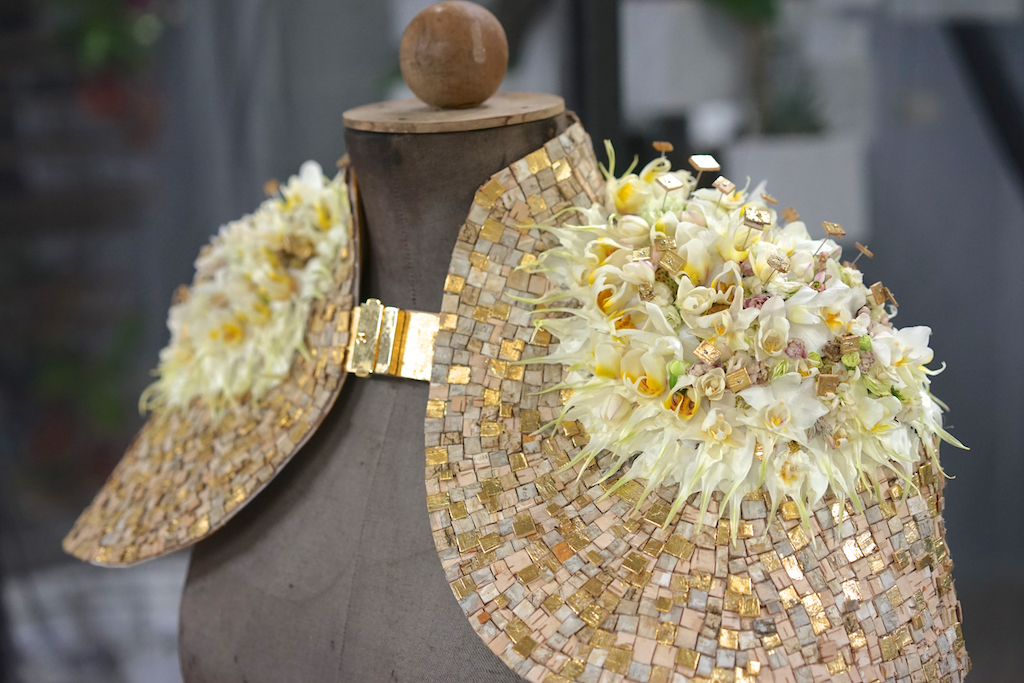 An entirely different top-3 emerged in round 4 of the Europa Cup 2016! Tommy Eide from Norway triumphed here, with a tree of life arrangement inspired by Gianni Versace that scored particularly high on the dimension of Composition. Interestingly, it was also one of the few plant designs that did not make use of an elaborate structure to convey the image of a shop window!

Tomasz Kuczynski from Poland also performed well, with an impressive hanging plant arrangement with gold accents. Third place in round 4 went to Spain’s Eduard Laguarda. A substantial number of competitors had some points deducted in this round, due to their arrangements not being in complete agreement with the instructions. The professional Europa Cup judges take their task as enforcers of the championship rules very seriously, make no mistake about it! 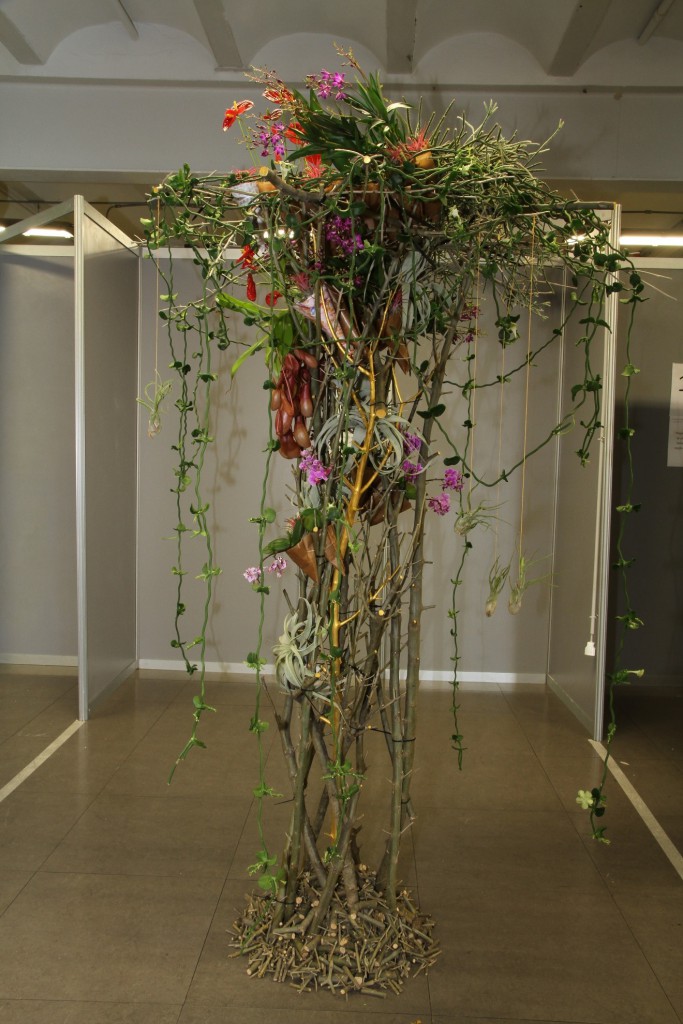 The Tree of Life, by Tommy Eide

For the final two tasks the 23 Europa Cup competitors moved to the impressive auditorium of the ‘Magazzini del Cotone’, for an on-stage conclusion in front of a live audience. This raised the stakes even higher, as working your magic in front of a 1000+ gazing people is not an easy feat!

Task 5 was a surprise assignment, titled ‘Love and Lust’: the twin emotions of affection. Our master florists had 60 minutes to design the ultimate Valentine’s hand-tied bouquet, using 60 rose stems! They did a great job pushing the limits of hand-tieds, but due to the strict requirements the scores stuck closer together this round. Roman Steinhauer from Russia took first place with a fantastically composed bouquet (see below), but finished less than half a point ahead of number 2, Nicu Bocancea from Romania. Dmitry Turcan from Azerbaijan claimed the third place position, only two tenths of a point behind! 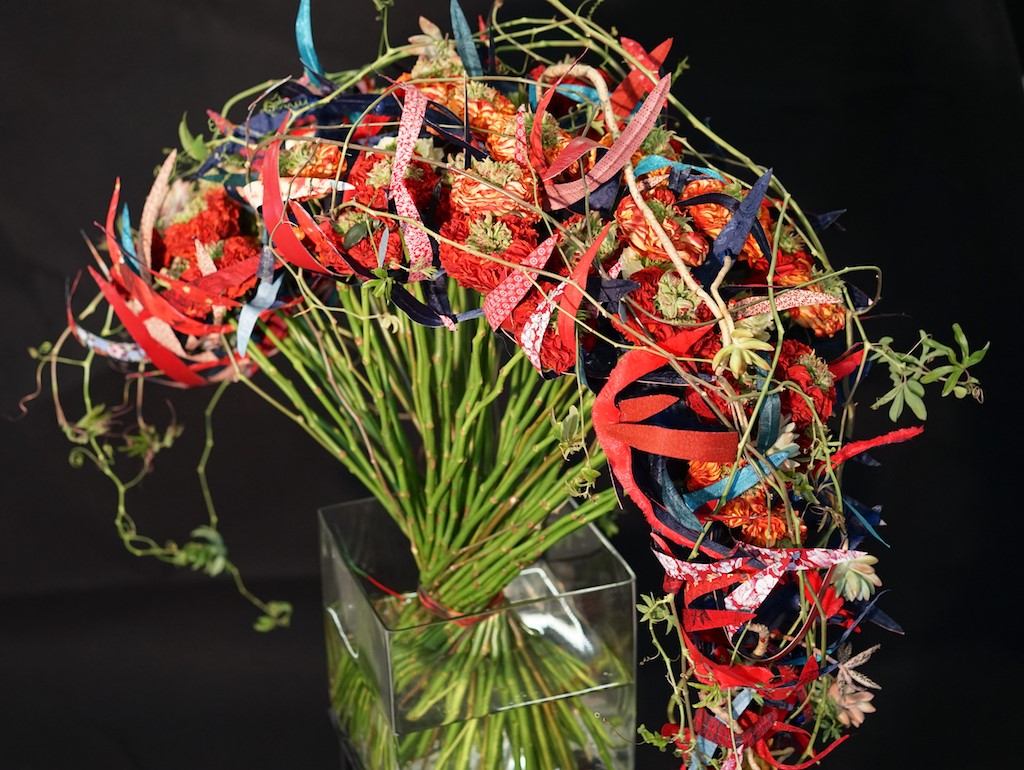 From Russia, with Love & Lust!

A Spring Surprise, and that is exactly what the final on-stage assignment was. The 23 florists received a tree, a box of sundries and a diverse assortment of florals. “Put it all together, as clever as you can!”, is what the instructions came down to.

The package of unusual components left a few of the candidates visibly struggling for inspiration. Exhausted, short on time and in the spotlight: who could keep his mind together? Three arrangers we have heard less from, so far, managed to do so the best: Tomasz Kuczynski from Poland, Sören van Laer from Belgium and Germany’s Marcel Schulz! 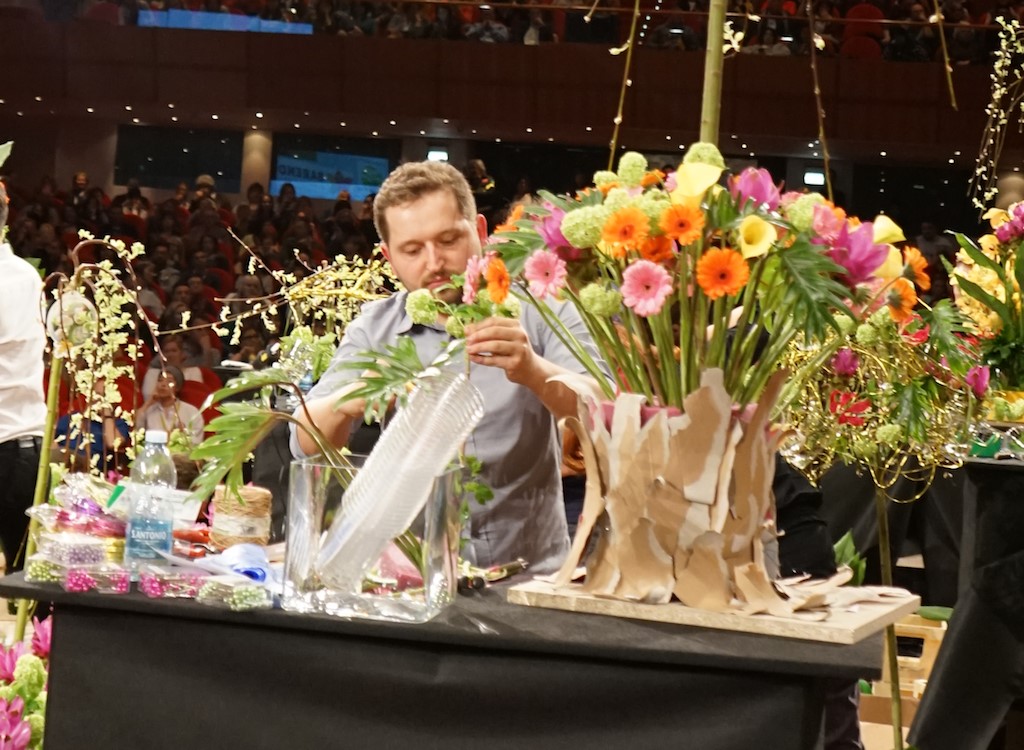 The Final Results of the Europa Cup 2016

So there you have it: 6 rounds of floral art majesty and mayhem! We could go on about it, but we have to know when to wrap it up as well (in fact, we’re impressed you made it this far!). It was a marvellous championship, and at the end of all of it the rankings look like this: 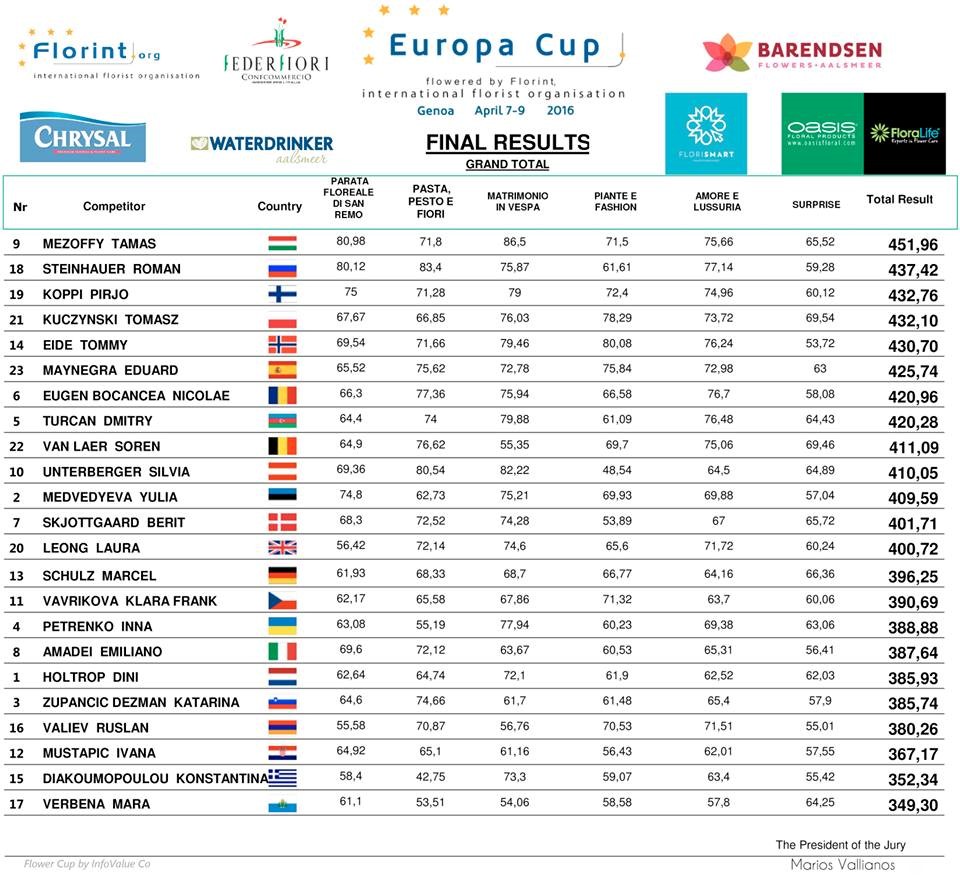 A last and final congratulations to Tamás Mezőffy on his fabulous triumph. And compliments to the other 22 competitors just as much: you were all inspiring, truly! Immense feelings of thankfulness also go out to all our wonderful sponsors, volunteers and other hard-working contributors. Hat’s off to you, from International Florist Organisation Florint!

The People’s Choice Award by Smithers-Oasis

Addendum: the Sunday after the championship featured the Europa Cup People’s Choice Award backed by Smithers-Oasis, one of the main sponsors of the European Floristry Championship. This contest may be seen as the democratic version of judging the Europa Cup: who would have won if the audience had its say, rather than a team of five highly professional floral art judges..?

An impressive total of 1077 people gave points to their favourite competitors in the Europa Cup, through our official Europa Cup App. And they came from no less than 65 countries! Note: it was not allowed to vote for the candidate of your own country, to keep nationalism from playing a big role.

Europa Cup 2016 winner Tamás Mezőffy had to cede his crown to the runner-up here: it was Roman Steinhauer from Russia who received the most votes of support from the public! A total of 842 points had been awarded to him, slightly more than the 783 of number two Nicu Bocancea from Romania. Dmitry Turcan from Azerbaijan could also be satisfied, knowing he was the third-popular competitor: he received 624 points from the voters! 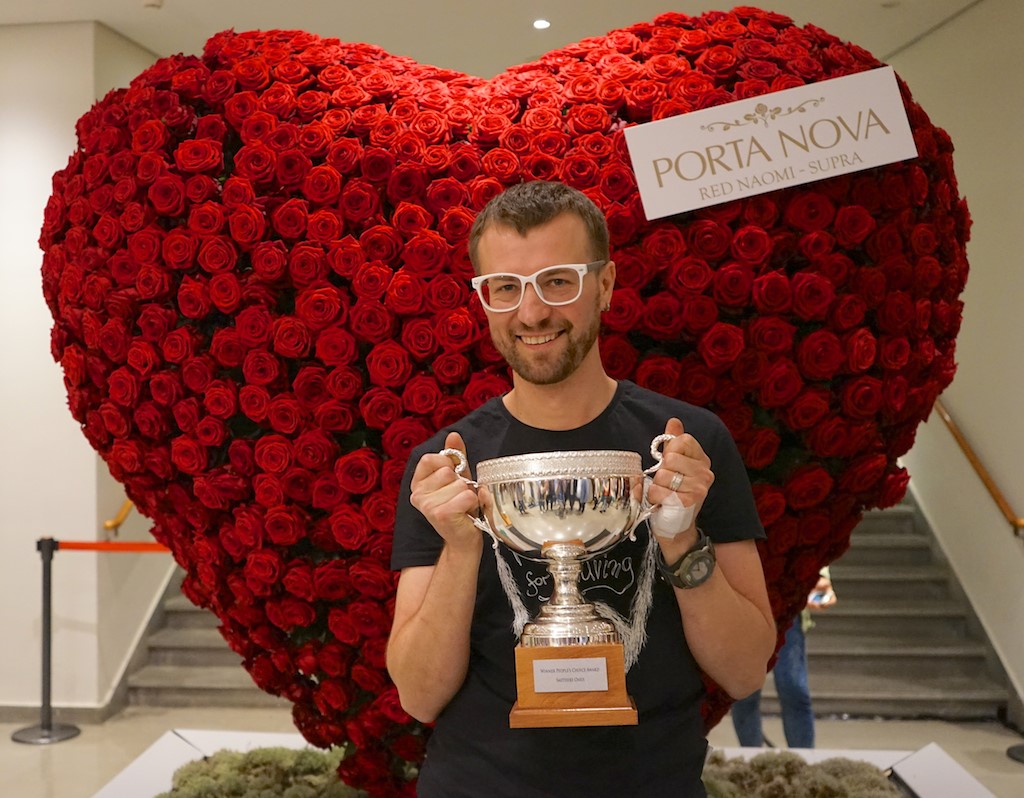